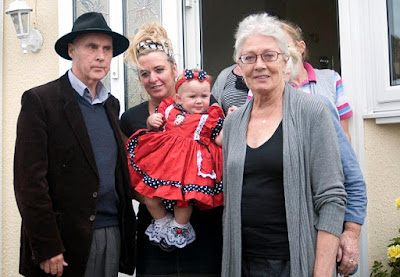 I promised to publicise articles in support of gypsy communities when I see them being mistreated. Here is a good example. The community of Irish gypsies in Essex on Dale Farm are set to have their homes bulldozed soon because they did not gain planning permission for their homes. The council argue that this is because they are on green belt land. Now I am all for protecting the countryside. But the land that they turned into a traveller site was actually a scrap yard before - hardly the rural ideal that the word "green belt" calls to mind. Plus the gypsies aren't squatters. They own the land. Thirdly doesn't this strike you as unfair considering news reports this week that there aren't enough new homes being built to match demand and that the process of gaining planning permission is too difficult and lengthly. In the article below Vanessa Redgrave has gone to meet the community and draw attention to their plight. The Guardian has written about it in a positive light - taking the side of the gypsies. I doubt very much if they will get the same notice or sympathy from the conservative press.

Oh look...in fact I've found an article written from (predictably) the other side in The Daily Mail

Honk if you're human!

It's nice after years of human bashing "oh aren't we awful we're causing global warming", "god we're horrid all this war and greed and killing, "no one's faithful...Ashley cheated on Cheryl again" stuff, to hear someone celebrating humans for the marvellously clever things that we all are. We can make cars and toilets and the internet! Yay us! That's why I like this advert for BBC knowledge. Its also really cute. Aren't the animators great! Yay us again!

Look here's another cute one. Apparently they're by Three Drunk Monkeys.

Its lovely for us ad people when we get to work with brilliant studios and directors to produce something really artistic and beautiful. This is what has happened to the creatives who work on Nokia over at Weiden and Kennedy.'Gulp' is a short film created by Sumo Science at Aardman, depicting a fisherman going about his daily catch. It was shot on location at Pendine Beach in South Wales and every frame of this stop-motion animation was shot using a Nokia N8. The film has broken a world record for the 'largest stop-motion animation set', with the largest scene stretching over 11,000 square feet.

It must be nice for the team. A little birdy told me that Nokia are cutting their budgets because their handset sales are dropping. Weidens have certainly been laying people off of late. Anyways enough chit chat, watch and enjoy.

Gulp. The world's largest stop-motion animation shot on a Nokia N8. from Nokia HD on Vimeo.

And here's the making of, which as Emilien pointed out, is pretty good too.