I am very enthusiastic about rituals and holidays which mark the turning of the year. I like to observe Pancake day, the build up to Christmas, bonfire night and Halloween. Since Halloween is the only one that requires fancy dress, it is an exciting prospect. I love the gothic element too. However the usual outfits are getting old. Year after year I have been a witch or a vampire. See my last outfit below. 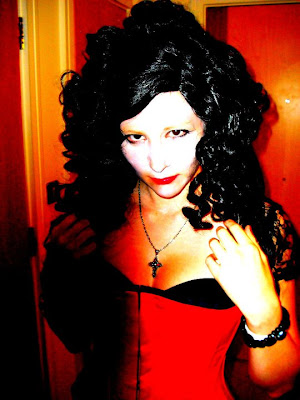 This year I am going to do something different - I will be doing Halloween the Mexican way - Dia de los Muertos and painting my face like a Mexican sugar skull.
Dia de los Muertos is a much deeper and more meaningful festival. It is a holiday which focuses on families taking time to remember and honour their dead relatives, friends and ancestors. This festival takes place on November the 1st and 2nd. The 1st day is the day to remember children who have died -  Día de los Inocentes. In this festival Mexicans might construct alters to their beloved deceased and visit their graves to tidy them and leave gifts. Edible Sugar Skulls are often one of the gifts left. These are al form of Calaca - skulls or skeletons used for decoration. Calaca's are often pictured with marigold flowers and foliage and wearing festive clothing - a joyous touch. In fact Calaca's are happy images because it is Mexican belief that no dead soul likes to be thought of sadly. it's a lovely thought that death is a joyous occasion.
So this year this is what I shall be - still spooky but also beautiful and joyous. I have found there are a lot of makeup videos to look at online. This is the best one I've found.

She takes her inspiration from artist Sylvia Ji. Here are some of her paintings that I might copy for my own face paints. 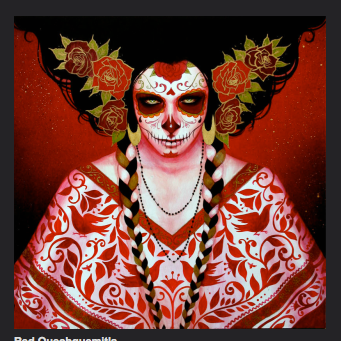 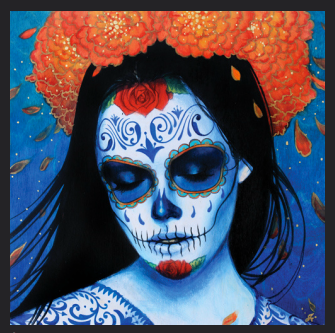 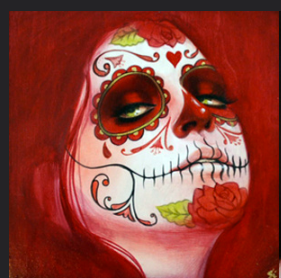 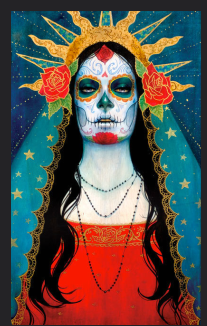 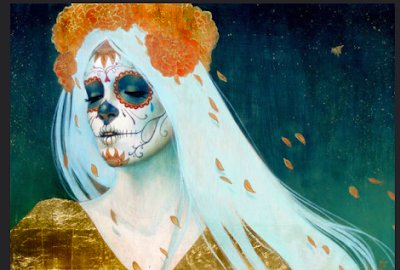 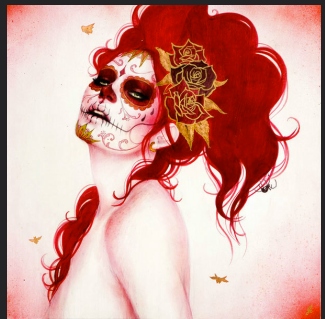 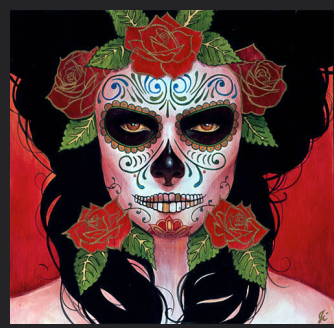 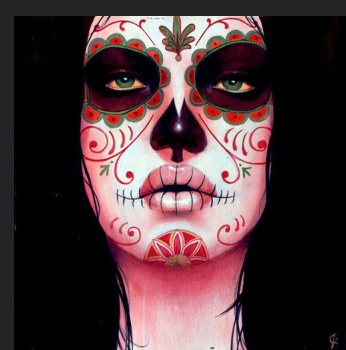 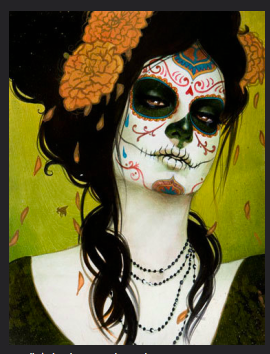 And for my nails I'm thinking of these skulls.

Have a joyful Halloween everyone.
Posted by Welshaims 5 comments:

Ikea is playing with their friends

Love the track on this sweet little advert from Ikea featuring children holding a dinner party with giant toys. It's so nice that it hardly feels like an ad at all. It's more like a cute music video with Ikea as a backdrop - a sign of real confidence.

Notice how all the toys try to be useful, apart from the big doll. She's a selfish bitch.

IKEA - Playin' With My Friends from Blink on Vimeo.

Directed by Dougal Wilson for Mother London.
The catchy track is 'Playin' with Friends' by British group 'Masters in France'.
Posted by Welshaims 5 comments:

Poetic and funny - generate your next text.

Found this brilliant website which takes all the words and phrases from your past texts to produce hilarious new mix ups that you can then tweet.

Here are some of my mashups. I'm not very high brow it seems - and somewhat obsessed with cats and Tv shows. Not sure why but telephone boxes and Pat Butcher from UK soap's hideous wallpaper come up many times.... 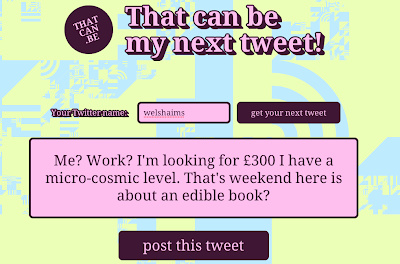 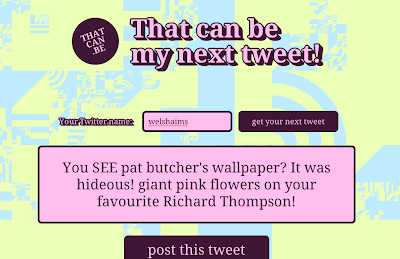 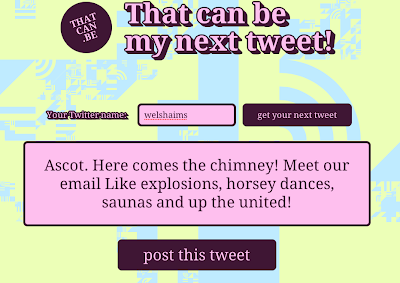 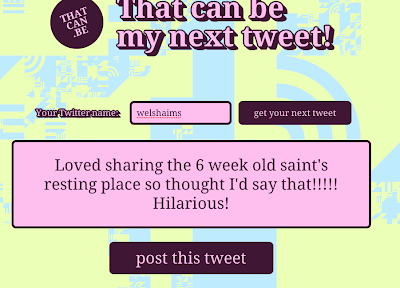 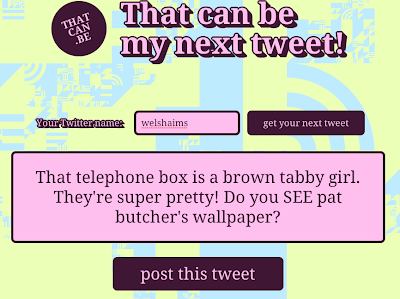 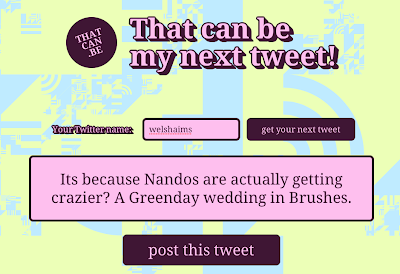 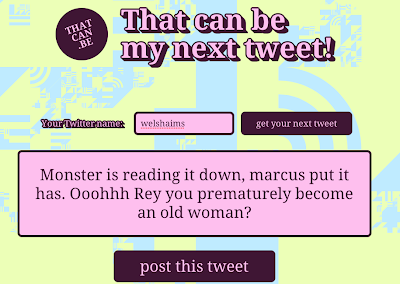 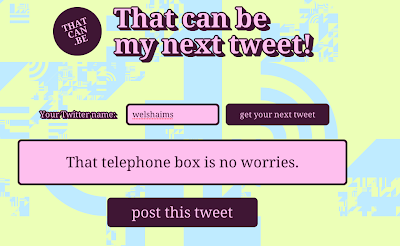 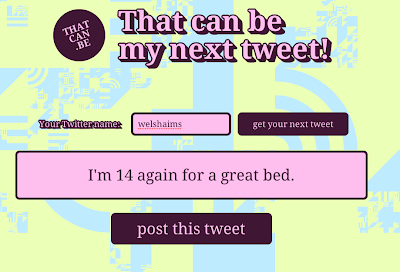 Bravo Bodyform! In a hilariously up to date response to a man called Richard's criticism of the lies of "happy" period adverts and his oft-heard lament that PMT made his girlfriend into a she-wolf, Bodyform have issued a announcement from their "faux-boss". Caroline Williams precedes to inform men everywhere that they had indeed lied - lied to protect men from a truth that they couldn't handle - that there is no happy period!!!!

The best line has to be "The blood coursing from our uterus like a crimson landslide". Thank god one sanitary towel provider has the balls to actually say what their business is all about. I also LOVE the blue liquid on the desk which she drinks - mocking the blue liquid often poured onto sanitary towels to suggest their absorbency in adverts. Because the truth of the whole thing is just so ghastly - yes we women also fart.


This was what the advert is a response to:

Richard Neill to Bodyform 8 October at 21:30 via Mobile --------------------------------------------------------------------------------­-----Hi , as a man I must ask why you have lied to us for all these years . As a child I watched your advertisements with interest as to how at this wonderful time of the month that the female gets to enjoy so many things ,I felt a little jealous. I mean bike riding , rollercoasters, dancing, parachuting, why couldn't I get to enjoy this time of joy and 'blue water' and wings !! Dam my penis!! Then I got a girlfriend, was so happy and couldn't wait for this joyous adventurous time of the month to happen .....you lied !! There was no joy , no extreme sports , no blue water spilling over wings and no rocking soundtrack oh no no no. Instead I had to fight against every male urge I had to resist screaming wooaaahhhhh bodddyyyyyyfooorrrmmm bodyformed for youuuuuuu as my lady changed from the loving , gentle, normal skin coloured lady to the little girl from the exorcist with added venom and extra 360 degree head spin. Thanks for setting me up for a fall bodyform , you crafty bugger


I seriously hope that this advert will usher in a new time of frankness in advertising for women's sanitary products. There is nothing to be ashamed of - its natural - every woman has them. So why shouldn't we call a spade a spade. Good for you Bodyform! From now on I will be choosing your pads to catch the crimson landslide from my uterus.

Oh and here is an example of one of those skirting around the issue adverts of yore:

Thanks to my favourite cat-spotting planner James for sending me this funny advert for the new Toyota Corolla. The story is of a persian who has a bad paw and has to endure what is every normal cat's worst nightmare - a trip in a car to the vet. Cats hate this shit. My cat Maisie yowls for the entire journey - no matter if it takes an hour! But this cat is in a Toyota Corolla. He enjoys his ride in the car so much that he uses up all of his nine lives in orchestrating accidents to get more trips to the vet. What he likes about the car so much seems to be the dashboard - bit weird. But then each to their own fetish I say.

But seriously a Corolla? - dat cat gotta try a jag!

You know why cats are always the bad guys? Coz they're just smarter than dogs and they are deadly. My kitten Ziggy slashed my sister's hand this week and my other kitten Bailey slashed my thigh  a few weeks ago. Both bled a lot. Look they enjoyed it - that's why they are high-fiving! 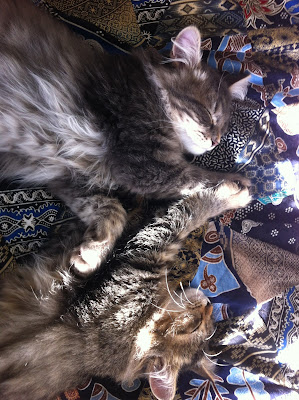 Think they can get around me by being super cute!....oh ok then maybe I'll give them some more biscuits.

Wanna pull more boys? Want a date - like - now? Well look no further. Here is makeup guru Shannon's guide to doing like SO attractive makeup that boys might just dump their girlfriends for you.

Ok so maybe not. But don't you know people who must seriously believe this? My Secondary school was full of them. One girl in my class used to shave her eyebrows off and pencil them in higher up her forehead.

Now here's a confession. Sometimes I find it really fun to do a few chav makeup things. And sometimes I go too far. Well I am a swansea girl! At my University reunion I faked tanned myself twice over. I thought I looked the bomb. But in all the photos of me I look orange next to everyone else. Lesson is - only chav it up when amongst similarly minded people.

Oh and this was the worst photo of the night - the candlelight and the quality of the camera wasn't helping my cause....Tangoed. As my aunty kindly told me recently "you have some awful pictures of yourself online". Nothing like family to keep your feet on the ground. 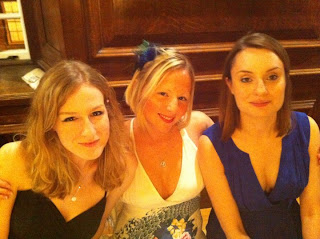 Check out Beautylish for a bunch of really great makeup and hair demos. Don't worry, my university reunion look isn't there.

This week I have been mostly....

Anyone remember the Fast Show sketch where each week a farmer came out of his shed and said "this week I have been mostly eating broccoli/ baked beans/ flans"?


Well here's what I've been mostly doing this week:

This week I have been mostly reading about Jimmy Saville being a kiddy fiddler.

For my American readers benefit Jimmy Saville was a TV presenter and radio DJ who presented two very popular and influential children's programs: "Top of the Pops" and "Jim' ll fix it" - a wish fulfilment program. Here is a clip of him in Jim'll Fix it:

When I worked on UK TV Gold a few years ago my partner and I had an idea for an advert featuring Jimmy Saville. "Wouldn't it be great if we got Jimmy Saville and fixed today's children's wishes on our adverts?", said we, all smiles and innocence. "Errrr...no....you can't have children in a room with Jimmy", came the reply. People in the BBC have since admitted that Jimmy's taste for sexually assaulting teenagers was an "open secret". It certainly seems that way which is a shocking failing on the part of our beloved BBC.
You can see Jimmy's exposure in this ITV documentary:
http://www.youtube.com/watch?v=fka6l2X0j-Y

This week I have been mostly giving up alcohol

This was after three successive drunken nights and awful hangovers. One saw me forgetting my pin number, crying because I'd forgotten it, and getting taken all the way to Essex in a cab because I didn't notice the taxi driver had mistaken my slurring for a different address. I then slumped on the doorstep unable to fit my key in the lock and had to be rescued by a sleepy boyfriend. After these experiences I am forsaking alcohol for a month. When I announced this on Facebook my friends were dismayed. Turns out they might like drunk Aimee better than the sober me.
Yes, sober me is a bore.

This week I have been mostly enjoying having purple hair. 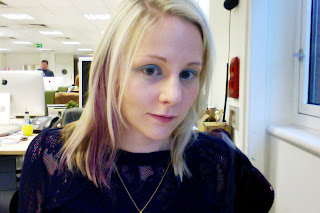 I'm rather unadventurous - or so my boyfriend told me last night. Dying a purple streak in my hair was an act of rebellion and fun. And now I have it I want more. MORE PURPLE! MORE MORE! And it makes me feel different - cooler, more kick-ass, stronger. When I wore my black halter neck dress on saturday the purple hair made me look like a goth. It's like being 17 again. I love it.

This week I have been mostly watching The Paradise on BBC1.

I love a good gentle costume drama. The Paradise is in the same vein as Downton Abbey. Surprisingly even my boyfriend liked it.

Next week who knows. I could mostly be in LA.


Posted by Welshaims No comments: