Follow my blog with bloglovin
Posted by Welshaims No comments:

The nooks and crannies of Welsh history

In school I was taught a fair bit of Welsh history but actually its the local history, the history of private grounds, families, buildings and tiny villages nestled in the trees in Gower that really interest me. This bank holiday my fiance, my sister and my dad went exploring south Wales looking for wedding venues and found lots of little histories, like mysteries waiting to be unwrapped.

First there's the story of Old Pennard, the village abandoned to the march of sand and erosion by Three Cliffs bay.

Then there's the story of Llanelen, the Gower village that took in 7 sailors from a ship wreck and buried all the other dead sailors in a mass grave. The sailors were thought to have influenza, caught because they almost drowned. Unfortunately it was the plague and the entire village died and was buried within a week. The village is now ruined under the woods near Llanrhidian.

Then there's the story of Craig y nos castle. Once it was the home of the famous opera singer, Madam Patti who sang for royalty and had many rich and important guests. She even built a theatre where she would give private concerts. After her death it became a home for TB sufferers, including children who were separated from their families and treated with lots of cold air and exercise. many children and adults died there and their ghosts, including the ghost of a little boy are mean to be seen in the windows.

This is the Penrice estate in Gower. The family apparently once owned much of Gower, they still own Oxwich bay. 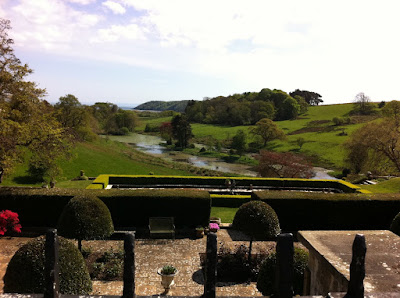 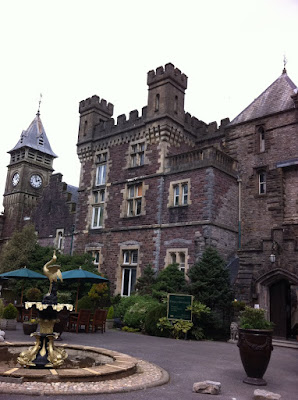 This is Madam Patti's personal theatre inside the TB hospital. 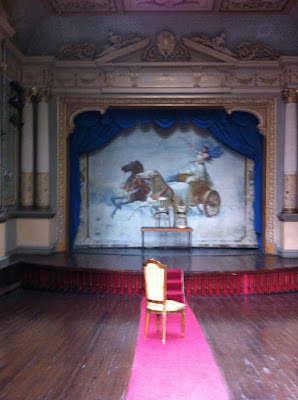 The recent Unison marches in London were partly overshadowed by the violence of the minority. Here's the other side in a video by Nottingham Unison (public sector trade union) featuring the talents and voices of the London branch too. My cousin Leo is the one singing out against the Tories at the beginning. I didn't even know he could sing like that. Go Leo!!!

The plight of the public sector is very close to my own heart as my family mostly work in the public sector. My Mum was a social worker, my dad a teacher, my Aunty and cousin work in Croydon Council in waste management. Also I hail from Swansea, where the local economy is based mainly on money from the public sector. In fact Swansea is such an extremely public sector - orientated place that every time they talk about cuts on the BBC news they mention Swansea.

All I can hope is that the Conservative Party listen to the people. And if not, I hope they get clobbered in the forthcoming local elections.
Posted by Welshaims No comments:

Britain (and probably America too) has gone royal wedding crazy. And it's big bucks for the economy (sorry big pounds) - the only good news the chancellor of the exchequer has had this year. Not only are Kate's fashion choices making Issa very popular and wealthy, and her engagement ring changing the fashion for diamonds to sapphires, there are postcards, flags, t-shirts, mugs and even toilet seats with Kate and Will's emblazoned on the front. It's not the best taste but it is good fun. And we British love a bit of tongue in cheek jubilation.

Here's T-mobile jumping on the band wagon in brilliant style with a looky-liley jamboree wedding ceremony executed by Saatchi and Saatchi. Don't you kinds wish Wills and Kate would just do this and surprise us all?

Here's a little making of video:

Love it. Thanks Antoine C, lovely work buddy.
Posted by Welshaims No comments:

Wooden Phone commercial - most longwinded ever

The video is for the Touch Wood SH-08C, a phone with an encasement made from discarded wood. It will be released by NTT Docomo in Japan later this year. The commercial was filmed in Kama City in Kyushu, Japan.

Morihiro Harano, creative director at Japanese ad agency Drill, said of the ad (via the New York Times) “We did not add any artificial music at all”. Hmmm...surely it's impossible that that ball wouldn't have even fallen off once? I guess there was a lot of editing involved.

In any case it takes ages to get to the product at the end. Beautiful piece of film but could have been half the length to get the point made. Smacks a little of art directors wanking...
Posted by Welshaims 1 comment:

OMG! I actually feel a little violated by this. Funny though.
Posted by Welshaims No comments: