BP are public enemy number one right now. Today in the Guardian it was reported that their clean up efforts have burnt sea turtles alive. I wanted to cry when I read that. It's absolutely awful that they are killing an endangered species.

Not only that their attempts to stop the spill have been woeful too. This piss take really made me laugh.

Email ThisBlogThis!Share to TwitterShare to FacebookShare to Pinterest
Labels: viral

In my swagger waggon

My Fiance and I always joke about what rap would be like if it was produced by the educated middle classes. Here's the answer:

Email ThisBlogThis!Share to TwitterShare to FacebookShare to Pinterest
Labels: advertising

look at your man, then back to me.

Love this ad. It's really funny. really well written. I might just start buying old spice again coz I loved this ad so much.
Posted by Welshaims No comments:

football thugs wanna stand with you on a mountain

Viral by Puma. Nice. Good casting too. compared to the beauty of LA I'm thinking, wow we're an ugly bunch.
Posted by Welshaims No comments:

Email ThisBlogThis!Share to TwitterShare to FacebookShare to Pinterest
Labels: viral

New experiences in the US of A 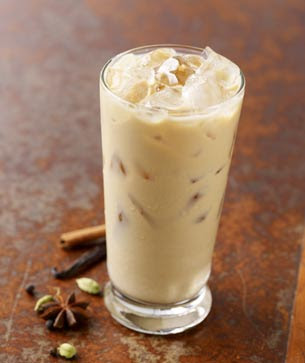 I have just ordered Iced Chai Tea Latte. It's my second ever - someone offered me one yday and today I know what to say to the coffee van. I am very excited because I don't like coffee so now I have something that sounds equally complex and looks equally as indulgent. Plus it tastes great.

In fact come to think of it i think I have been making my own version of this drink - I make it when I'm having trouble sleeping and it was my solution to the fact that hot chocolate has caffeine in. First I heat milk, then I add a squeeze of honey, cinnamon and nutmeg.

Other things that I have sampled during my stay include -

The breakfast burrito (a little dirty but not as dirty as the chilli burger by far),
The Billion Dollar Bite (bacon, cheese, tomato, egg in toasted bread - SO GOOD! )
Italian Soda - (refreshing mix of fruit juice and soda water)
Chocolate with sea salt in
Organic mint ice-cream that actually tastes and smells like garden grown mint
The mint Oreo cookie (better than the regular variety as the mint lifts it)

Other weird things that I have noticed or learnt in Santa Monica:

1. avocado is a breakfast food too. In fact avacado can be featured in every meal.
2. Don't ask where the loo is, they won't understand. And don't clarify by saying "toilet" - it's so crass! it's bathroom or restroom.
3. sales assistants ask if they can "open a room" for you. never heard that before.
4. Dogs are better behaved - they are soooo socialised in LA
5. Everyone is better looking than in England - hey you could be a model, hey you too, and the guy carrying equipment on set, and the guy serving you in the food van. Wow.
Posted by Welshaims No comments:

Phil Collins felt bitterness and anger in the air not joy!!

The dark, accusatory lyrics of this song lent themselves to one of the most well known incorrect meanings. The story says that Phil Collins saw someone drowning once from far away, and that a third person, who was close enough to help, either ignored or refused to help the drowning person. Appalled by this, Collins penned this tune as an anonymous condemnation of the person’s cowardice and/or apathy. Some versions of the story have Collins finding this person at one of his shows and even singing it directly to them. Of course Collins says that story is incorrect, and the lyrics actually arose from the bitterness and anger he felt while going through his divorce."

I have now spent two days in LA relaxing and getting over jet lag before the storm hits.

Anyways I am staying in an amazing hotel and I've spent my days so far thus:

Friday night I flew in, showered then was taken by a LA local to Tommy's. It was dreadful. The place looked like a cross between a car park and McD's before they had the renovations. Actually I'm being harsh - to McD's. It was more like a car park. The multistory really scummy ones. I had a chilli burger and chilli fries. I expected the food to taste delicious - after all why would my LA local recommend it? Nope. The chilli was slapped on like a cow pat and looked like one too. It wasn't even spicy. Bllleeerrghh! Everyone else was very polite about it. But there is nothing I hate worse than crap food. Asked what I thought I told LA local that it was "really bad". Now everyone has given me the reputation of being fussy!!

I woke up in the middle of the night with terrible stomach pains and spent an hour getting it out of my system.

Anyway the next morning the UK crew took me to a local bowling alley for breakfast (Mr D's). I was a little skeptical but it looked like a palace compared to Tommy's. At least the tables weren't made out of pebble-dash concrete. Low and behold my french toast with maple syrup and crispy bacon with potoatos was delicious.

Afterwards I wandered off along Muscle beach and looked at the fit guys working out like Gladiators on the beach gym. Then I sunbathed by the pool until I met up for a spot of shopping down 3rd street promenade. I have a new favourite shop - Anthropology! I can only afford the sale stuff but the materials are sooooo nice!!!

Dinner was at a lovely place that used to be called "Orange" (according to argumentative French copywriter).

Today was very similar but I headed of to the boutiques down main street. I really want a maxi dress. couldn't find the perfect one though. Maybe I'll wait until I go back to the UK.

This is the most ambitious painting project ever undertaken as a promotional stunt by a paint firm that I have ever seen.
I like it but I do worry about what it will all look like in 5 years - flaking, peeling? Might look beautifully distressed. Might look distressing.

And here is one of the artists involved talking about the "Lets colour" project in Paris.

Shit my Dad says and other quotes.

Sister Kate (in car): "Hey look it's a cow! Oh wait maybe it was a horse. It looked like a horse but I think it was a cow".

Me: "Kate there are a lot of people here from...like...foreign".

Fiance at the crem during an awkward silence with the funeral director: "There's big chimneys you've got there"
Funeral Director: "yeah health and safety made me have them"

Text from dad: "I've just walked into a tree"

11 year old Cousin Dylan at the football: "I don't think many of the people here have proper houses...you know, not like us!" (there were a lot of burberry caps around).

Dad's 3 year old goddaughter looking at Kate's bedroom, "Oh it is messy, but I do like it".

Email ThisBlogThis!Share to TwitterShare to FacebookShare to Pinterest
Labels: funny 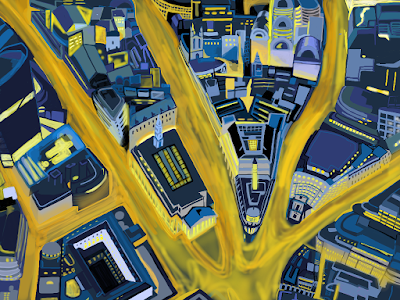 Email ThisBlogThis!Share to TwitterShare to FacebookShare to Pinterest
Labels: art

Samsung produced this lovely piece - a projected advert on a building in Amsterdam. I love these kind of projections they are really great to watch, great to recapture and put on the web and great for news coverage. This one is particularly nice - moments like the building cracking or the glass breaking and water falling out are very dramatic.

They have also turned the stunt into a Youtube based game where you have to click on as many butterflies as possible in teh given time to win yourself a lovely new 3D Tv. Have a go. If you win, remember me.

On Saturday night my friend Gemma introduced me to the joys that are STAR STORIES! Of course, being Welsh we chose to watch the star story of Catherine Zeta Jones, who hails from our hometown of Swansea. Big up the Welsh! Have a laugh while you watch the ad for it yourself.

The World Cup begins and Shakira's song captures it wonderfully!

I love this happy music video - the African dancing, the clips of players (did she have problems getting rights? because I know how difficult it can be). The song is catchy, even if you don't really know what you're singing.

From all the clips I have seen on the news it just seems like South Africa are just really happy to have the World Cup and mean to welcome the world with open arms. Their team aren't amazing but who cares! It's all about optimism and fun. They have the right attitude and the English fans could really learn from them.

And the lovely innocence of the kids out there is just gorgeous. A head girl of a little school interviewed on the news said that she was looking forward to meeting Victoria Beckham. Victoria, please make it happen!

Oh and here's what my friend Antoine sent me afterwards - apparently it's the original!

I am so excited! My very clever and beautiful friend Felicity was on The One Show showing top chef Jay Rayner how to make the perfect chips. Apparently the secret is they have to be fried three times. As Felicity says it's a hassle but it's worth it! And she def looks great on TV. Me thinks she's the new Nigella!! 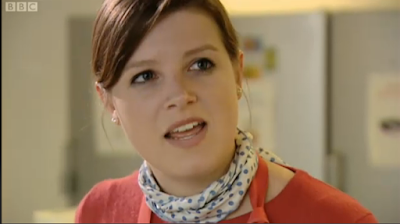 You can also find out about Felicity on her website: http://felicitycloake.com/
Posted by Welshaims No comments:

Email ThisBlogThis!Share to TwitterShare to FacebookShare to Pinterest
Labels: celebrity 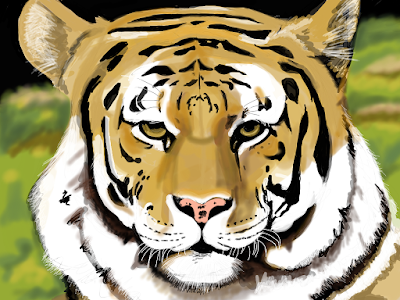 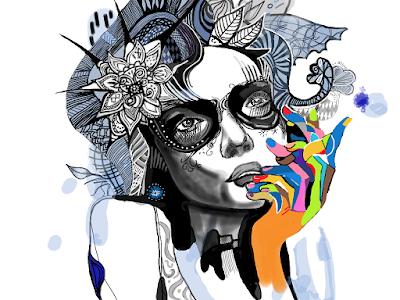 This is my version of a work by an artist called Minjae Lee. 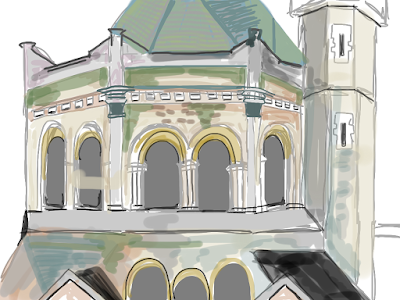 This is the church across the road.
Posted by Welshaims No comments: 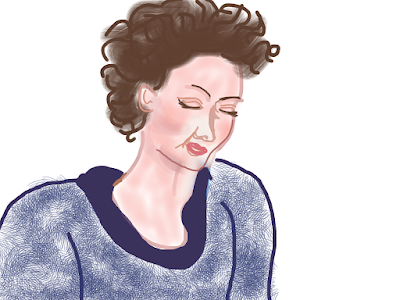 This is my first 10 minute attempt at drawing using Brushes on iPad. It's a picture of the lovely Emma who I work with. Apparently Hockney is a convert and has switched from using the iPhone to using the iPad to create works of art to send to his friends. The great thing about it is that it is much easier than using a mouse to draw on a computer. Of course people who spend a lot of time drawing on their Macs and PCs have Wacoms - those lovely drawing pads. But these are expensive. They also aren't portable. The iPad means you can always have a drawing pad with you - and can whip it out to capture a scene if the fancy takes you.

Here are three works of art created by Hockney. What do you think? 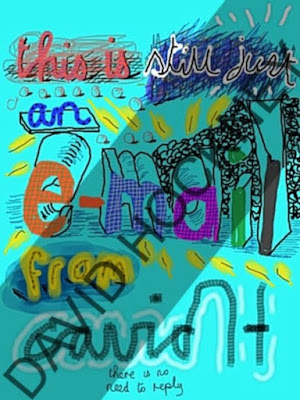 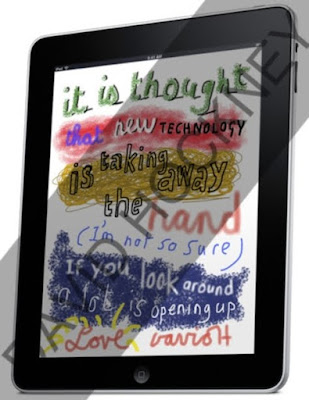 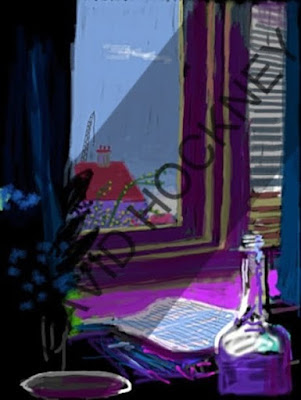