Are the boys getting crazier?

This is not, the greatest blog post in the world! This is just a tribute!....

Because I just spent AGES writing the best blog post EVER and then I pressed a key and it disappeared. The whole thing! What key was it? WHO BLOODY KNOWS!

Anyway. The blog post said this...but it was better I promise.

Recently I have been clubbing a lot. In doing so I have been chatted up by some rather weird and wonderful characters. These boys include the crazy and the deluded. Some have only reached the level where they might think an orange was a house. Others would take the orange, have sex with it, then think they were God of the oranges and sing a song about it whilst running around Tesco in the nude. This is how these guys went about trying to pick me up on a night out. 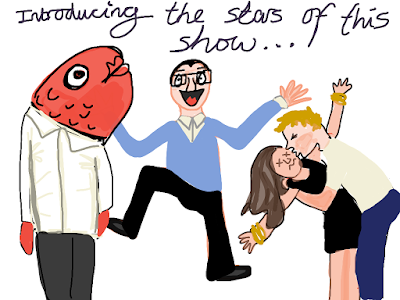 Psycho Pilot
Pyscho Pilot approached my friend and I in an Indian restaurant where we were busy taking pictures of ourselves hugging a giant stuffed tiger (as anyone would when faced with such a thing). He politely invited us to join him and his friends at his table with the line "we have spare beer!"Who were we to refuse? Thinking back maybe he had spiked the beer first and then, by accident, drank the wrong one. We were chatting about his pilot training when he suddenly grabbed my hand and thrust it against his chest. "Er...ok, you're confident aren't you?" I said. "What!?! How dare you!" shouted Psycho Pilot! With that he jumped up, grabbed the nearest waitress and started spinning her around in the middle of the restaurant. His friend, who I will call Deluded dude, sat down next to me. "He's a really nice bloke. Honestly. So quiet, level headed...he's a real catch..." (at this point Psycho Pilot was getting shouted at by the restaurant staff but was oblivious because he was now bending the waitress over a table and snogging her)..."um...he's the nicest guy and I think he really likes you..." carried on Deluded Dude hopefully.

Mr Salmon
Mr Salmon is so named because he was pernicious about swimming against the tide. The tide of my withering disinterest. Mr Salmon introduced himself in a club. I told him I was with my friend and couldn't talk to him. So 10 minutes later he came up with a friend for her in tow. Great. The conversation went like this:
Salmon: So, what do you like doing?
Me: I just work a lot in all honesty.
Salmon: Do you like the theatre?
Me: I don't have the time for it.
Salmon: Seen any good movies recently.
Me: No I've been working too hard.
Salmon: Been on holiday?
Me: No. Not for ages.
Salmon.........What about sports?
Me: I don't like sport.
Salmon: Hey listen I really like you. Can I take you for dinner?
Sadly Mr Salmon it might surprise you but the answer is no. Desperate much?

Disco Dick
Disco Dick confided with me at the bar,
"I have a special skill".
"What's that then?"
"Timing", replied DD with a special smile.
"Huh?",
"You know...TIMING!"...
"I don't know what you're talking about...are you good with clocks?"
"No...TIMING!"
"Ok DD, it's probably something sexual right since you keep raising your eyebrows".
"No it's not!"
"Ok what is it then?"
"errrr....yeh...you're right it's something sexual....It's like when you wait until the girl cums before you do. Drives the girls wild. They love it".
"Ok...anything else?"
"I'm an amazing dancer".
"Ok why don't you show me?"
"The sex thing?" says DD hopefully.
"No the dancing".
What followed was watching a DD roll around on the floor attempting to spin on his back interwoven with some thrusting and spinning in circles.

These are just three of the men I have met recently. Another man I know has threatened an ex girlfriends with suicide if she breaks up with him. I can't even talk about that one but seriously. Boys! What's going on? Pull your shit together! Channel your David Bowie, your Mick Jagger...fuck it...channel Frankie Cocozza from the X Factor if it helps! Just don't do this shit!

Oh...you're talking about the "socialkik" website huh? And you probably just spammed me. Just what I want from writing a long blog post. Thanks.

Well I have a bona fide comment for you right here! I'm sorry you deleted your best blog post ever, but I approve of the Tenacious D reference. I was never into clubbing a whole lot but I have bar-hopped quite a bit in my day, thank you for reminding me what I don't miss about it! Ha ha!
At least Disco Dick didn't come up behind you on the dance floor and start "dancing" against you, that's what tool-bags here in the States do in bars. *sigh*

Hey GurlNxtDoor Thanks so much I really do appreciate a REAL comment!
Unfortunately British guys do that too. In fact the same night I met Mr Salmon and Disco Dick there were some guys who followed us around for two hours doing that until I put my hand in their faces and shouted "Go away! GO AWAY! GO OVER THERE AND GET OUT OF OUR FACES!". They still didn't leave until I shouted "SHOOO" and made go away gestures for a whole minute. Should have included them in my blog post.

Very clever. I came across this by accident and had to comment. Hilarious.

BTW i am in advertising 2. ur hot. maybe we could hook up.