Rate Your Cat - some brutally honest truths about your pets

I've just stumbled upon a very funny website called Review Of My Cat. http://www.reviewofmycat.com
Some owners seem blown away by the sheer beauty of their cats. Others are less rosy-tinted.

Here are some choice excerpts:

Cat: Rascal
Sociability: C
Rascal is very bi-polar. One minute, she’ll be sitting peacefully behind the couch, and the next, she’ll jump on the back to attack my head, as if possessed by a demon (true story). I believe that while humans are not around to look at her, she relaxes in a chair, wearing a beret, and smoking one (of many) cigarettes. I’m convinced she’s French.

Cat: HRH Ping (of the Ping Dynasty)
Appearance: B
He has a fine, if unmemorable, gray tabby stripe

Henry Rollins
Usefulness: F
Henry does nothing. ever.  He’s good at mowing the lawn while i garden and then throwing it up as soon as we come back inside.
Cat: Gordon
Sociability: B
You don’t pick Gordon up for a cuddle, he comes to you when there’s a gap in his schedule.  Perhaps Sheila (his sister) acts as his secretary.  It would explain why she lazes by the fire all day, its probably acting as her desk and she’s making appointments for Gordon when she sees us sit down.
And this is my favourite:
Cat: Eisenhower
Appearance: B
His black fur sets off his striking yellow eyes, and if you didn’t know better you’d think this is a regal feline. It’s not. This cat is a moron.

So I've decided to do one about my kitten Bailey. I chose Bailey not Ziggy because he is the most useless of the pair  and definitely the weirder sibling. 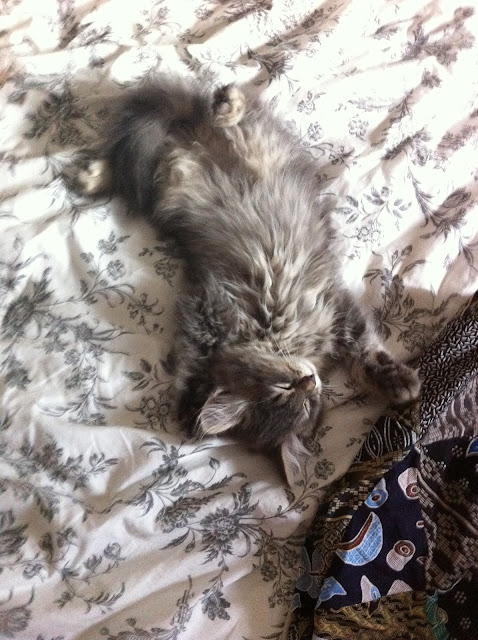