So I have tracked down the Chloe-fake shoes at Top Shop in Covent garden and bought them. It was only by pure luck. The sales assistant I asked said there were none in stock. Fortunately another member of staff overheard and rescued a renegade pair from the stock room that she had remembered being delivered over from another store. I thanked her so much she looked at me as if I was a weird desperate foot fetishist  (insert correct term). In buying them I have saved £700 - the real ones are £800 and then some. 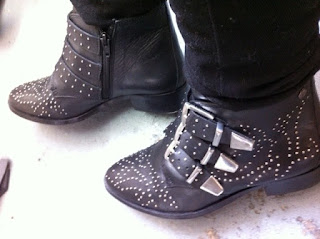 But with a ying there always has to be a yang.

So I popped out of work while I was waiting for a meeting to get my eyelashes and eyebrows tinted, as I had done in Swansea (it immediately looked nice there...they do it in the middle of Debenhams department store so it has to). Unfortunately the woman didn't understand when I said the word "natural" and has given me almost BLACK eyebrows. And not just that! She thickened them. I've got two slugs on my face! It looks fucking ridiculous. I look like frankenstein's aunt. In an effort to get rid of some of the hair she'd just died I told her to pluck them. The worst bit is I had to go straight back to work afterwards with frankenstein eyebrows and bright pink skin all around them.

The moral of the story?
Don't be a retard and get your eyebrows done in the middle of a work day.

PS. Its now pissing it down outside. The weather understands my anguish.

check out my blog and, if you want, let's follow each other on GFC or Bloglovin' or both ;)

oooh how horrible! I'm sorry. That really sucks. But maybe one day you'll look back at your two slugs and laugh :) And the good news is you can probably have them fixed

Hello dear,
maybe you would like to follow each other's blogs with GFC or via bloglovin? or even both?

have a nice day!
gV

I scrubbed them when I got home until they became more bearable. And by the time of the wedding they were actually ok. PHEW!
Thanks for your comment.

Sure Diana I'll check it out

Sure I'll take a look