Ziggy and Bailey have been settling in well and have decided to start their own London Olympics. As they are the only participants so far they are set to take gold and silver in most sports. I say most because Bailey isn't great at all the categories. 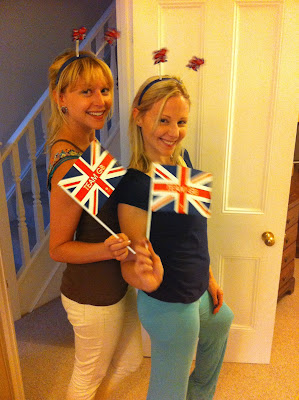 Shoe diving.
Both kittens love and excel at this sport. It involves jumping face first into a shoe - preferably a boot so that a kitten can get their whole head inside. Points for paws and head and velocity at which it is done. This sport is anyone's for the taking. 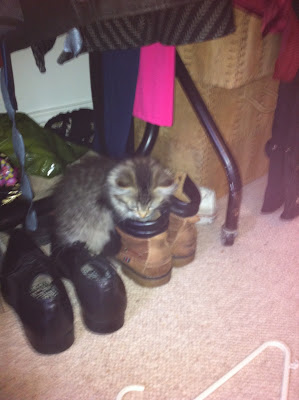 High jumping.
This sport really only has one qualifier: Ziggy, who gained a personal best when she jumped the baby gate. Bailey has yet to compete as his back legs don't leave the floor by more than a millimetre.

Running.
Ziggy is in a secure position to win gold. With the ability to chase a cat toy for over half an hour without getting bored. Bailey is trailing far behind and will need to learn to chase things that actually move - rather than picking on knots in wood.

Wrestling.
Bailey will take gold due to has bigger size and weight which he uses to his full advantage against his sister. Biting is permitted and both cats are great at the "whole jaw in mouth" move.

Boxing.
Both kittens are adept at getting a sneaky paw to each other's heads - a high scoring zone in boxing. Bailey is the bookies favourite due to his willingness to start a fight and see it through.

Pot holing
This sport is anyone's for the taking. Both kittens have climbed inside our chimneys and Ziggy managed to climb behind the toilet, giving it a good dust on the way. This will be an interesting category to watch. 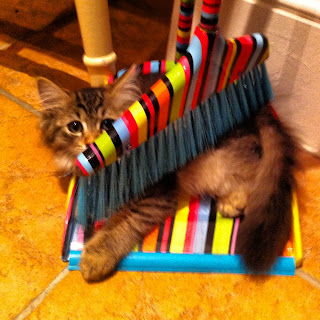 Ziggy practices getting into tight spaces for the pot holing.

Climbing.
Both kittens are great at this although this method is practiced more by Bailey - mainly due to the fact he refuses to do any jumping. 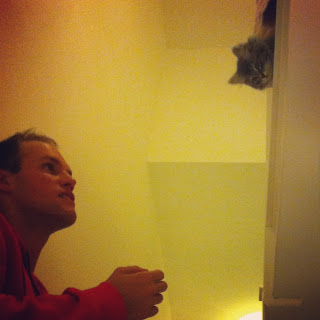 Bailey in the climbing heats

Gymnastics
There is one clear leader in this field - Ziggy who's mid air acrobatics are a sight to behold - she has mastered the single twist jump, the backflip and the roll poly. Bailey is more of a floor display boy and has yet to master a graceful landing - too many faults in his performances so far. 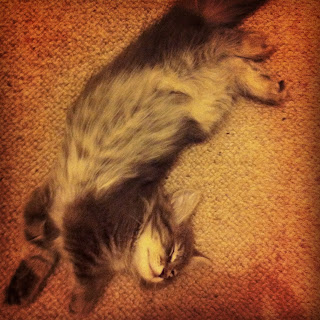 
If you would like to enter your cat into the London 2012 Kitten Olympics please send me a picture of your kitten's feats of athletic ability.

Your kittens are really cute.

Your blog seems really cool so I thought I'd give you a follow on blog catalogue.

Thanks so much Alexandra. I've been feeling a little like "whats the point" recently as I don't seem to get more followers. So thanks I really appreciate your follow. In fact you have inspired me to write a new post.