A year ago I was in a mad shopping frenzy before my holiday. I needed a new bikini so Fiance and I headed to Selfridges and to the upper floor where underwear and swimwear are. Failing to find any bikinis that cost less than £80 I elbowed my way past a girl with long blonde hair and two guys. Suddenly my Fiance grabbed hold of my elbow and swung me into an aisle.

"Do you know who you just elbowed out the way????"

"That was Prince Harry and Chelsea Davy!!!" 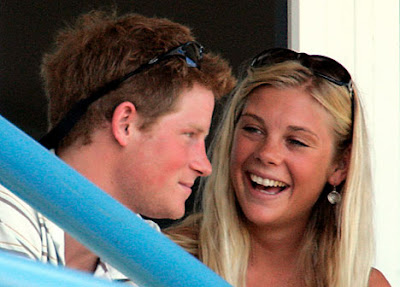 So what were they like in the flesh? Chelsea has a very snubby nose and her hair was in BAD condition. Harry? Well he just looked pretty normal. He was wearing a padded gillet. Very royal family.

Fiance and I looked around for Special forces police but could see no one hanging around wearing dark glasses and talking into a walkie-talkie like in the movies so we decided to stalk the royal couple from a safe distance. We followed then as they went to into the lingerie section, where they stopped and looked at naughty nipple tassels and giggled.

I would have taken a picture and sold it to heat magazine but I thought that if I tried undercover agents might swoop like something out of The Borne identity. So I resisted.

And that was the day that Adgirl met HRH Prince Harry. The end.

PS: If you guys have any great "bumping into a celebs" stories please let me know!
Posted by Welshaims

Once, a long, long time time ago before I was a little blonde ad girl I was cycling in Windsor Great park and a friend suggest I swapped hands. Bang! Arse on floor, bike on top- and a big black car nearly swerved into me. Struggling, with flailing legs akimbo, I turned around to see what maniac was driving so totally not allowed fast in the park - to see Prince Charles at the wheel of his Aston Martin roaring with laughter in a most ungallant way at me on the ground. More Toad of Toad Hall than my handsome prince. Not so much a brush with Royalty- more a swervy dusty, bruisy bump. I'm still gutted that he didn't get out and let me drive myself home as if i was a Pretty Woman!

OH that is pretty hilarious! Nice counter-story - love it. And shame on Prince Charles.