The embarrassing story of the super glue.

Do you have that thing where if something embarrassing happens to you, you need to tell everyone? Yes? Me too.

I was feeling chuffed with myself as I had remembered to buy super glue to fix a few things broken around the house. Earlier in the night I had glued a smashed bottle stopper back together (a resin gift from a wedding). Putting the lid back on the superglue I decided to read the instructions to see how long it would take to set - apparently I was supposed to wash the nozzle with nail varnish remover - too late.

Anyway here comes the embarrassing bit: Later, about to go to bed, I realised that I had forgotten to glue the nose back on my Care Bear. 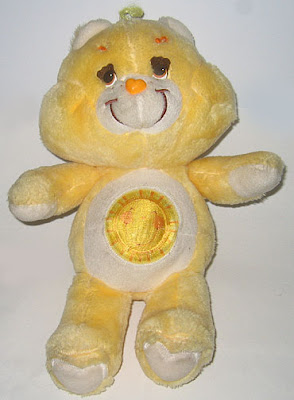 My Care Bear Funshine is my favourite childhood teddy and she has had some tough times recently. First she got mauled by a dog who bit off her plastic heart nose. My Aunty glued it back on. Then I left her on the window sill where she went moldy. When I washed her her nose fell off again.

Anyway, so I tried to open the super glue - of course I had managed to glue the nozzle closed. So I tried taking off the nozzle and smearing superglue on Funshine's nose. Unfortunately I also managed to smear it on my fingers - suddenly my fingers were also stuck together - and stuck to Funshine's plastic nose. I pulled my fingers apart quickly and using my other hand I managed to pull off Funshine's nose - now I had superglue on all my fingers! And it dried a hard white crust that would NOT come off. My boyfriend googled "How to get super glue off fingers" and found the answer was nail varnish remover. So I tried rubbing it with nail varnish - nothing - then soaking my fingers in the solution - nothing. In the end I had to use a nail file and file it off my fingers! It took me 20 mins and I can, 2 days later, still feel it in the lines of my finger prints.

And that, my friends, is the embarrassing story of the superglue.
Posted by Welshaims

oh no, I'm sorry! At least Funshine is safe and well. I still have my Love-a-Lot bear from when I was three. :)